-A +A
Home / Explore / In the heart of Troyes / Troyes, an identity by District / Arts district

Centre of the bourgeois elite

This “upper quarter” was the centre of the bourgeois elite that held sway over the city from the 14th century to the 16th century. The wealthiest merchant families, often allied by marriage, mainly resided on the rue Turenne or around the Saint-Pantaléon church, as close as possible to the lively squares where the foires de Champagne were held.

The textile activities of these merchants attracted traders from other regions and countries. Hence the visitor would find hotels with large stables, such as the Hôtel du Dauphin, one of the city’s best (later demolished), which gave its name to the street now called the rue Turenne.

Lombard traders set up in the Hôtel des Angoiselles and themaison des Allemands was established on the rue de la Trinité. In addition, it was in the Trinity Hospital (now the Hôtel de Mauroy, the Maison de l’Outil et de la Pensée ouvrière) that the first hosiery factory was set up in the middle of the 18th century, an activity that flourished and generated prosperity for the city in the 19th century.

The powerful Vauluisant, Clairvaux and Montier-la-Celle abbeys occupied many sites. Opposite the Saint-Pantaléon church, the Vauluisant abbey had a vast residence. After belonging to large bourgeois families from Troyes it was bought by the city in 1933 to house the Vauluisant Museum, the Museum of Troyan Art and the Hosiery Museum

The church, which owned around one-third of the city at the end of the Middle Ages, increased its ascendancy over the neighbourhood in the 17th century. The Ursulines set up at that time, buying the Hôtel du Dauphin, the oratory (on the site of the present-day Beurnonville barracks, built in 1877) and the Trinity. On the rue Général Saussier, formerly the rue du Temple, the Knights of Malta built a mansion on the site of the old Templar commanders’ residence, which was destroyed in the 1524 fire that broke out in this very street.

To the south and east of the «bouchon de champagne» (champagne cork), in the Gros Raisin neighbourhood, the canal des Trévois prompted the digging of rus (canals, since then filled in) that supplied several mills with water before emptying in the ru Cordé (at the site of the present-day canal).

This was a neighbourhood of craftsmen who used water for their production. In addition to textile craftsmen (manufacturing fabric, wool cloth and even silk products), millers, butchers (in slaughterhouses called massacreries and tueries), launderers and dyers, leather workers and tanners (in so calledmégisseries). Then paper makers starting operating here in the 15th century (paper was made from rags).

The very dilapidated Gros Raisin area was razed in 1968. The only vestige of this neighbourhood is an old turret that was installed on the building facing the Saint-Jean-au-Marché church. 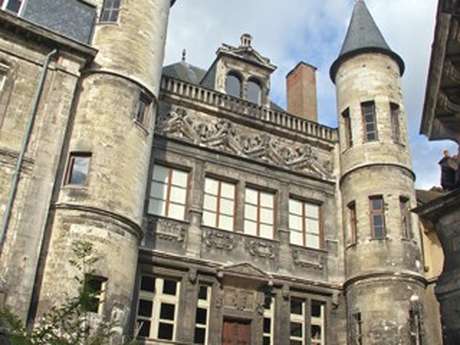