-A +A
Home / Explore / In the heart of Troyes / Troyes, an identity by District / Saint-Jean district or the Champagne Fairs district

Starting in the 12th century, the Counts of Champagne helped the city to expand by stimulating the celebrated foires de Champagne that attracted traders from around Europe, thanks in part to the fairs’ code of conduct, set up in 1137, which was a means of guaranteeing that any merchant harmed during the fair would be compensated, even outside his own domain.

These huge markets were held on specific dates several times a year at Lagny, Bar-sur-Aube, Provins and Troyes, where there was a “foire chaude” on Saint John’s day in June and a “foire froide” held on Saint Remi’s day in October. The fairs lasted several weeks, especially around the Saint-Jean-au-Marché church.

All sorts of clothing, woollen goods, silks and dyed fabrics were sold there. The local tanners sold their tack and saddlery and other leather goods and the so-called tricheurs placed cob in walls and carpenters and woodworkers traded techniques. Precious woods were found there, hides and live animals and parchment, replaced in the 14th century by paper (made here using rags).

The silversmiths competed with their jewellery and fine mechanical devices, potters sold off their ceramics, the money changers weighed a wide range of currencies and blacksmiths brought tools, arms, locks and keys, iron construction bars, etc. from distant places.

From Flanders came material and woollen cloth ; from Spain, Cordoba leather ; from Italy, silks and battle horses ; from Germany, furs, and from the south of France, oriental spices.

We should also mention the viandiers (butchers), grain and wine merchants, herbalists and apothecaries, without overlooking the jugglers and the baladins (wandering entertainers) playing on the fairs’ stages. 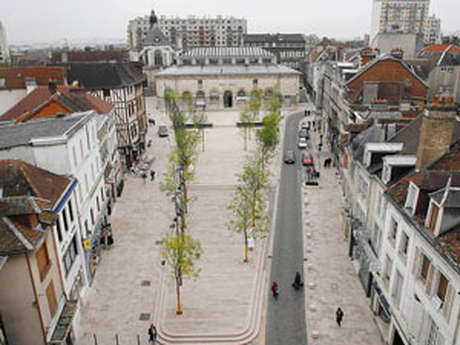 Émile Zola street , then called  Notre-Dame street and, for a time, ’"Épicerie" street, was a broad shopping boulevard. There, one found second-hand clothes, spices and poultry. The boulevard widened out to the west into a vast “Marché au blé” (wheat market), where today’s Jean Jaurès place stands.

The 2004 refurbishment programme highlights the façades of the houses and their restored wooden timber.